Haliburton to Uxbridge via the

You know when you pick the longest day of the year to plan your longest ever bike trip ever, you might be in for a challenge. A good friend Adam had mentioned to me about six months ago about riding our bikes from Haliburton to Uxbridge along abandoned rail lines turned multi use trails. Approximately 140km and in one day. First off I thought he was a little crazy, but he seemed serious and of course I said yes. Adam had been thinking about this route for a long time and seemed pretty confident that we could conquer it. Thinking it might take us all day, Adam picked the date to be the summer solstice, to give us the most possible daylight, just in case we needed it. When I was asked to go, there was a few feet of snow on the ground, and my bike was disassembled for easy storage in my shed. I wasn’t thinking about riding my bike at the time but I knew I would need to get my act in gear to get physically ready for this ride.

As soon as the snow left and the days warmed up I was out on my bike, a 2003 Kona NuNu, slowly building up the distances to get myself ready. 25km, 35km and even up to 77km where the distances that I chalked up through the spring. After some of these rides I would finish feeling great and ready to go again, but sometimes I would return home and feel like crap, tired and very sore. To say the least I had my doubts about finishing our upcoming journey and definitely was mentally preparing myself to suffer for a long time during and after. I am pretty sure a 140km ride on a fancy race bike while cruising on hard packed asphalt is nothing special, but bouncing around on rocks and gravel might be more of an accomplishment. Adam and I knew this ride wasn’t going to make any headlines or break any records, it would be more of a personal challenge, to see what we can handle.

We decided to ride from Haliburton to Uxbridge while following the Haliburton County Rail Trail, Victoria Rail Trail and the Trans Canada Trail. Our ride actually started the night before the solstice. After parking our vehicles in Uxbridge, packing our bikes, we had a mostly paved road ride to Port Perry. After a quick stop off at the LCBO we headed into town to grab a quick dinner at the Jester’s Court Pub, just before we had to catch our bus up north. With a few beers and tasty dinner refueling us, we headed over a few blocks to our bus stop. Adam had planned most of the trip and my job was organize the transportation to Haliburton. There was only one bus that travelled this route daily and we had about 5 minutes to spare to meet at the north east corner of Mary and Water St, where there should be a small plaza for pick up. We arrived at the intersection and instantly panicked because the NE corner was not a plaza, it was a lake. With a quick few phone calls to the bus company, total confusion had set in. We were now late and being sent to another location to hopefully catch our bus. At this point we were already starting to prepare for being trapped in Port Perry. Good thing for cell phones because it was the only way for us to figure out whether we had missed our bus or not. The bus company was a little clueless but finally got back to me with the proper bus pick up location and thankfully the bus was late, stuck in traffic. Once Steve the driver of the big white coach arrived, he help us wedge our bikes into the luggage hold, calm had set in. Our adventure now felt officially on its way.

The bus trip was great, we zig zagged our way from small town to small town dropping off passengers. Adam and I are both fire fighters and have young children, making it easy to chat. Also the bottle of Glenlivet helped pass the time, hence the visit the LCBO on the way into Port Perry. After about 2hrs on the road we arrived at our motel in Haliburton. The final stop was right beside our motel making it easy to find. Two beds and room to keep our bikes was all we needed. We knew we wouldn’t be spending much time there, a quick sleep with an early morning wake up was the plan to make the best of the daylight for our long journey. 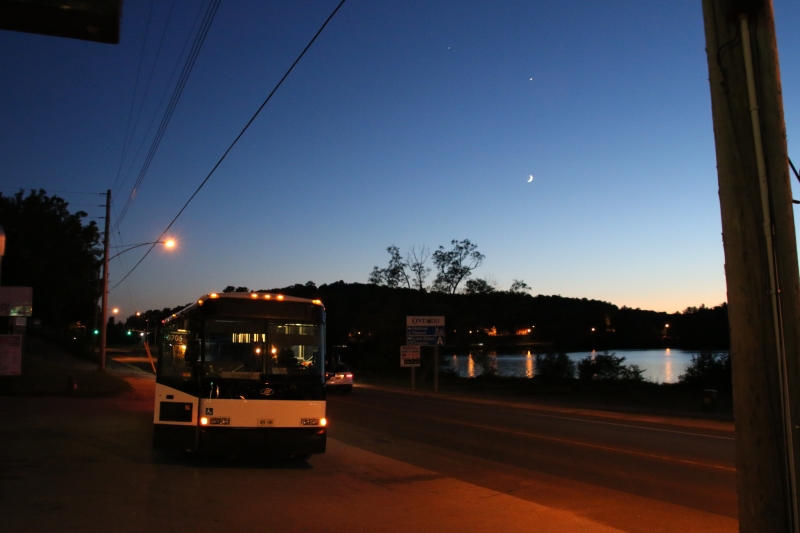 5:30am was a nasty wake up call, but the sun creeping up over the lake in front of the motel was a pleasant sight. A thick layer of fog coated the warm lake water. We quickly packed our bikes and snacked on granola bars and trail mix to get us started. Our trail was just in front to the motel, and we headed south.

Within a few minutes we had come across a large billboard sized map of or first 34kms ending into Kinmount. All of the reviews describe this section to be the most rustic and unpolished conditions. The reviews were right, the trail felt like the rail line had basically been picked up and then left untouched. A great trail for ATV’s and winter snowmobiles, a little rough for bikes looking to make good time.

I love finding trails that get you out there, away from the beaten path. This section swerved thru lakes, ponds ,swamps and mostly surrounded by thick forest. We crossed many old rail way bridges that provided great places to take a quick break to grab a snack and get the blood flowing back in my seat. It was definitely the most wilderness section. There were still some of the old railway buildings along our way, many of them were showing their weathered age. Within and few hours we arrived in Kinmount, hungry and ready for our first meal. A greasy spoon breakfast was on the menu. 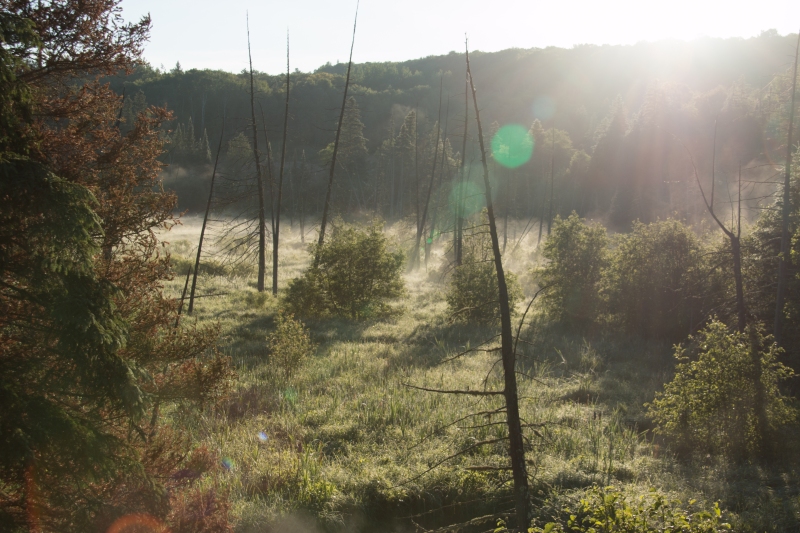 After refueling, we headed out on the next section heading thru Burnt River and on our way to Fenlon Falls. The trail was great, smooth, fast, flat and straight. We didn’t pass many other cyclists, rather we got dusted by the many ATV’s flying past us. At this point I felt great, the legs were working well and felt positive about our finale in about 100kms. 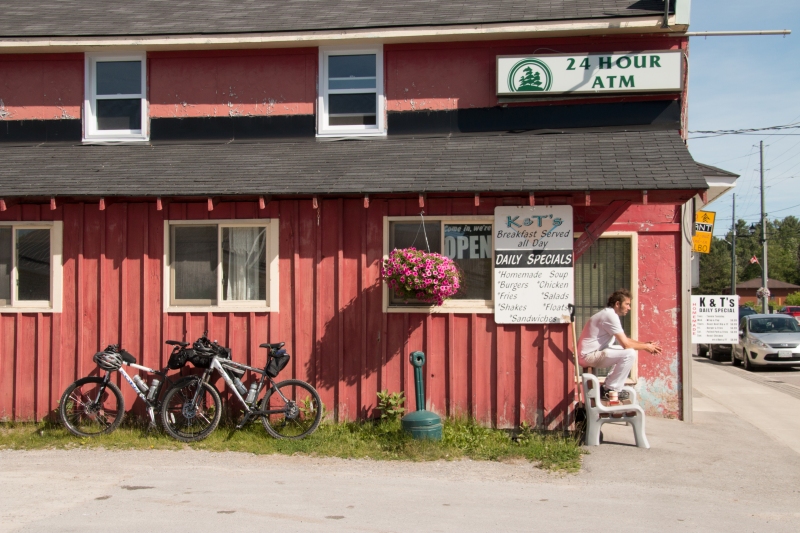 We pulled into Fenlon Falls for lunch. A very busy small town on the Trent – Severn waterway, bustling with weekenders enjoying the perfect weather. A quick stop at the grocery store and a picnic table near the locks made for a great lunch. Watching the boats rise and fall in the locks were an excellent way to relax. Our lunch was our longest rest of the day which was important, but it also made it tough to get back on the bike especially being a little envious of the cottagers cruising the lakes. Lindsay was our next destination.

As the mid afternoon heat started to beat down, I started to get a little worn down physically. The nice flat trail made it easy for making good time, but it was beginning to become boring. I couldn’t have imagined being a train engineer travelling these routes daily. Unfortunately the beautiful scenery would become plain and routine. Maybe it’s good as an adventure to keep mixing it up and trying new routes.

Another break in Lindsay was well needed. With 100km finished our next 40km would be the toughest. With nowhere else from Lindsay to Uxbridge to buy food or water, we refilled our bottles and inhaled iced coffees and set off. The last section was on the Trans Canada Trail. 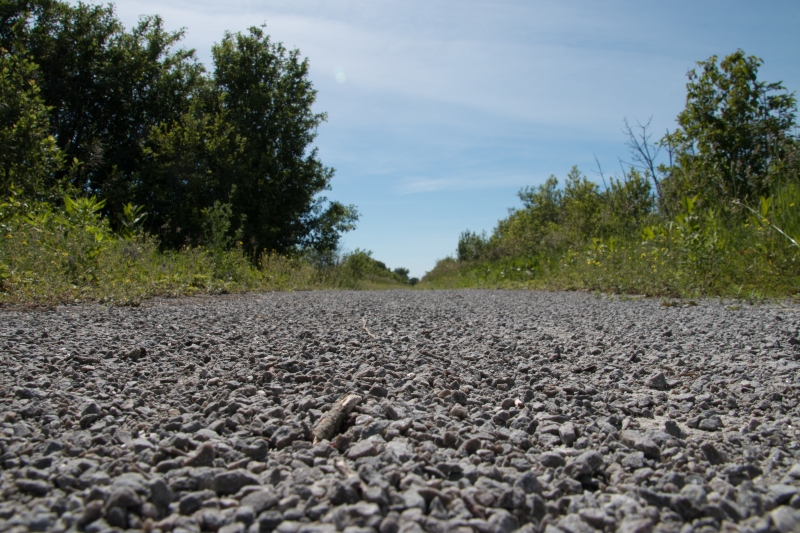 With a bit of riding through town we finally made it back on the crushed limestone. The scenery before Lindsay was mostly forests, swamps, lakes and rivers, great for sightseeing. After leaving Lindsay our views had changed. We were now more exposed and surrounded by flat farmer’s fields. The sun and wind started to affect my riding. With a slight headwind and roasting sun, I started to fade. The extremely long and straight trail, worn me down. If it wasn’t for all of the roads we had to stop and cross, I would have never kept up with Adam.

One of the local farms built a wonderful picnic shelter along the trail. We would stop there for a rest, snack and some scotch. The only bad thing about stopping to take a break, is having to get going again. The trail seemed to have gone straight west for ever, but finally a large sweeping turn towards the south pointed us right towards Uxbridge. The trail would slowly descend into wetlands, it almost felt as if the trail was floating on top of the water. With about 20km to go, I was hurting, and getting slower. I knew I could finish strong if I could ignore the sluggishness and soreness.

You could always tell when we were getting closer to towns because the road traffic would pick up. Uxbridge was close, we left the swamps and were now riding through backyards. We even thought about carrying our bike over a bridge that was under construction. A handful of danger signs warned us, directing us to a detour. At this point a detour seemed like a lot more riding. I guess when you get tired and lazy, the short cut always seems more attractive even if it’s more dangerous. The detour ended up being a good decision because as soon as we left the dirt trail, we moved onto pavement in town and were making great time. Within a few minutes of riding with traffic we had finished. 140km in just short of 13hrs, with lots of daylight left. It felt great to be finished. With all of the joy of accomplishing something challenging makes it easy to forget about the pain and suffering. It’s always the days after that your muscles and joints remind you of your efforts. For a moment after finishing I wanted to keep going, so I did. Right across the road to the beer store and back to celebrate with Adam. There’s something cool about finishing an adventure, it’s the “what’s next?” or “what now” thought. Adam and I have already talked about next years route, can’t wait!

One thought on “Along the Rails: Haliburton to Uxbridge”